Problem: Gaps and dangles appear between lines or edges after editing features

Editing features such as snapping a line, splitting a parcel, or clipping a polygon produces gaps (line undershoot) and dangles (line overshoot) when zooming in to a map scale of less than 1:1.

The problem occurs when zooming in to an unrealistic scale of less than 1:1. The software's limit is a scale of 1:1. At this scale, the screen display is equal to the real distance on the earth's surface. Hence, zooming in to a scale of less than 1:1 pushes the resolution tolerance past the maximum threshold, and produces visual artifacts such as gaps (line undershoot) and dangles (line overshoot).

Use one of the following workarounds to edit features and ensure no gaps and dangles are produced: 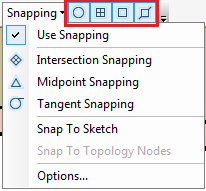 The image below shows the snapping cue (at the tip location where the two lines are about to connect) and the snap tip (represents the snapping properties). 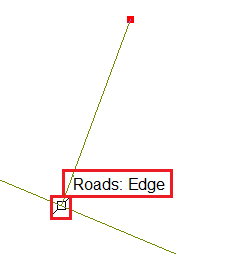 Increasing the Snapping Tolerance value increases the possibility of snapping.

Topology rules enable spatial relationships between features in a single feature class or between two feature classes to be defined. For more information on different topology rules, refer to ArcGIS Geodatabase Topology Rules. Topology rules can be used to identify the occurrence of dangles.


Measuring the offset distance against the XY Tolerance value

The default XY Tolerance in ArcMap is 0.001 m, which equals approximately 0.003 feet. A gap or dangle with a value of less than 0.003 feet is considered a coincident.

The image below shows the measurement of an offset distance between a shared boundary after a parcel is split. At a zoom map scale of 1:0.05, the difference between the shared boundary is 0.001552 feet, which is less than 0.003 feet. Hence, the line is considered a coincident. 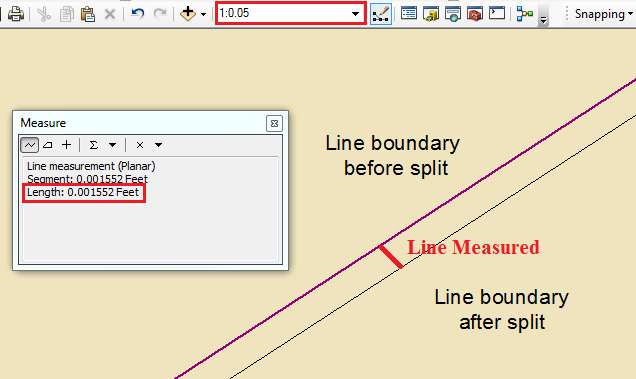 Running the Find Dangles check determines the presence of dangles in the dataset. For more information,refer to Finding dangles on line features.

For additional information on removing gaps for feature polygons, refer to Removing slivers or gaps between polygons.