FAQ: What does the cell value mean on a point/line density output raster?

What does the cell value mean on a point/line density output raster?

The cell values of a point density output raster represent the number of points that fall within the neighborhood per area unit (without specifying a population field). For line density, they represent the length of the portion of each line segment that falls within the neighborhood per area unit (if not specifying a population field).

The density area unit is selected by default upon the linear unit of the projection from the input feature dataset (the feature dataset must be in a projected coordinate system in order to choose a different area unit from the tool drop-down list box): 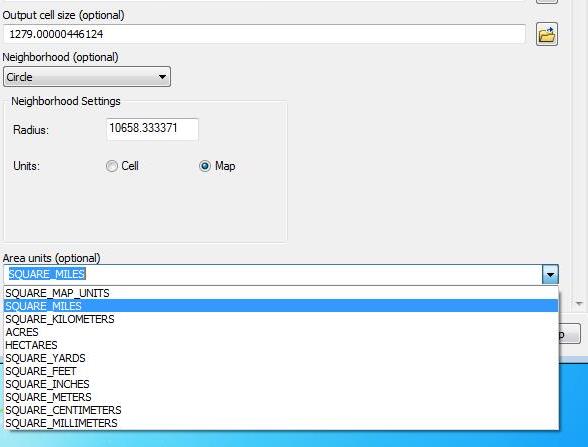 The pixel value does not have much to do with the output cell size of the raster or the projection of it. Output cell size is the resolution of the dataset, and its linear unit depends on the output raster projection. For example, a point density raster can contain density values measured per square mile yet the dataset is in feet (i.e., each pixel covers an area of 100 ft. by 100 ft. on the ground). It makes sense to modify it if planning to overlay the data with others for further analysis and would like to keep them consistent, or the raster is to be converted to vector data and it is necessary to control the smoothness of the vector geometry. The raster resolution has an affect on the output data file size (i.e., the finer the resolution, the larger the file size, in general).

For line features, a divided highway probably has more impact than a narrow dirt road, and a high-tension line has more impact than a standard electric distribution line. If a population field other than 'None' is specified, the 'length of the line' is considered to be its actual length times the value from the population field for that line record, and so for the Point Density tool.