English
Menu
Technical Support
Back to results
Print Share
Content feedback is currently offline for maintenance. Please try again in a few minutes.
Is This Content Helpful? Search on GeoNet Submit to ArcGIS Ideas
Back to top

FAQ: How Zs Aware polygons are handled in Validate Topology at 8.3

How Zs Aware polygons are handled in Validate Topology at 8.3

Simple point, line and polygon feature classes with or without shape attributes can participate in a topology. Topology is used to measure and improve the quality and spatial accuracy of features in its participating feature classes. Topology uses a process called validation to measure and ensure correctness of features. Validation snaps geometry between features together, given a tolerance value.

This document describes how Z values are altered when validating a topology in ArcGIS 8.3.

During the validation process two operations are used to determine the Zs of vertices; interpolation and collision.

Interpolation is used to determine the vertex attributes of the new vertices when a segment is subdivided.

The interpolation for Z’s is :

where Zi is the interpolated measure, Z1 and Z2 are the measures at the end points, and F is the ratio of the subdivision. Ranges are between 0.0 and 1.0, which means that at F = 0.5 the average is computed.

Different vertices with the same XY are represented by the same point. When two points are joined together because of this, they are said to 'collide'. In a case of collision there are two possibilities: the Z-ranks are equal or they are not.

If the ranks are not equal, the resulting point is assigned the Z-value and Z-rank of the point with the highest rank.

If the ranks are equal, a weighted Z average is assigned to the output points. 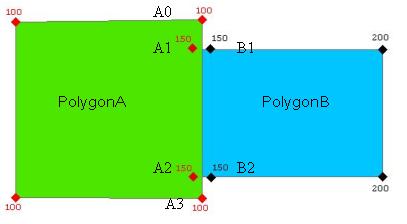 STEP 2 (interpolation): Computation of the point A1, which is interpolated on the line segment A0-A2. This proceeds as under step 1, with the same output.

STEP 3 (collision): Computation of the weighted average for points A2 and B2. Because both points will have a weight of 1 (A2 interpolated, B2 initially assigned), the output Z will be the average of 100 and 200, or 150.

STEP 4 (collision): Computation of the weighted average for points A1 and B1. This is the same as step 3.

When working with Zs aware data validate is introducing a new concept: the Zs rank. If there are z-aware feature classes in the topology, rank them so that the z-values of vertices collected with higher accuracy are not changed when snapping with the z-values of features of lower rank. A rank of 1 is the highest rank. Refer to the section above: Vertex attributes Interpolation and Collision. 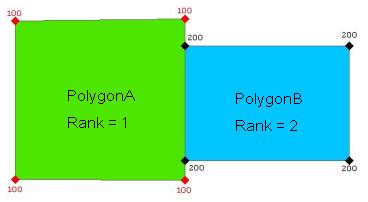 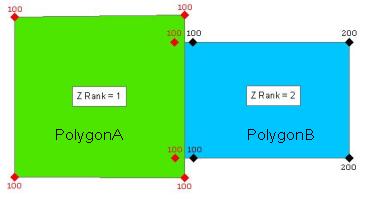 In this example after validate the features attributes are modified. The polygon A has a higher rank (rank of 1) than the polygon B (rank of 2). The interpolation steps are the same as in the previous example. The difference is in the collision step, the resulting Z values will be those of the points of polygon A, because it has the higher rank.
Last Published: 5/5/2016
Article ID: 000006152
Software: ArcGIS-ArcEditor 8.3 ArcGIS-ArcInfo 8.3 ArcGIS-ArcView 8.3